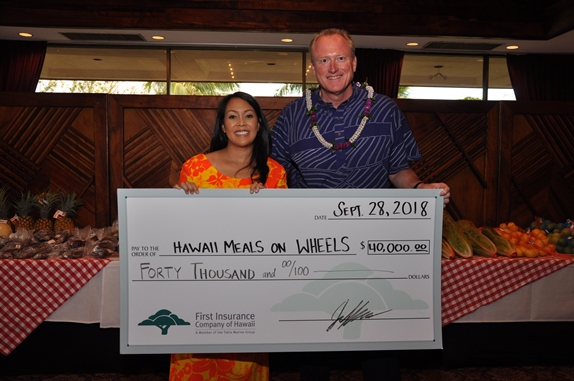 HONOLULU – First Insurance Company of Hawaii (FICOH) topped off its five-month social media campaign to celebrate and honor Hawaii’s kupuna with a $40,000 donation to Hawai‘i Meals on Wheels (HMoW) at its annual gala held Sept. 28 at the Honolulu Country Club. The donation will allow the nonprofit organization to deliver 2,500 meals to homebound seniors and those who are disabled.

FICOH was honored as the nonprofit’s Kupuna Advocate of the Year at the event for its exemplary support for Hawai‘i Meals on Wheels and other organizations that serve seniors.

The social media campaign, titled “Malama Our Kupuna,” was designed to heighten awareness of HMoW’s mission to help Oahu seniors and individuals with disabilities preserve their independence at home by providing hot, home-delivered meal service and personal interaction with those they serve. The campaign invited followers to share memories of their kupuna and also included a recipe contest.

FICOH’s 10-plus-year partnership with HMoW is anchored by the company’s dedicated employees who take turns volunteering during their lunch breaks every Thursday and Friday to deliver meals to HMoW’s clients in the Punchbowl area. The employees never miss their assigned delivery days, even on Christmas, New Year’s and other holidays when FICOH’s offices are closed for business.

“We’re pleased with the positive response to our campaign and appreciate the support of so many who shared their memories of a special senior in their life. We’re also proud of our employees who willingly share their commitment to seniors by volunteering their time and fostering our longstanding partnership with Hawai‘i Meals on Wheels,” said Jeffrey Shonka, FICOH president and CEO.

In 2017, FICOH’s total philanthropic donations to the community surpassed $700,000 with an additional 2,000 volunteer hours donated by their employees.
First Insurance Company of Hawaii
Founded in 1911, First Insurance Company of Hawaii, Ltd. is the oldest and largest property and casualty insurer domiciled in Hawaii, with assets of $659.0 million, liabilities of $377.5 million, and policyholders’ surplus of $281.5 million as of December 31, 2017.

First Insurance, a member of the Tokio Marine North America (TMNA) group of companies, enjoys an “A+” rating from A.M. Best Co. Proud of its broadly experienced, service-oriented staff, First Insurance employs more than 300 insurance professionals and distributes its products through 26 independent general agencies. First Insurance was named Best Large Business by Pacific Business News in 2017 and has been awarded the American Heart Association’s Workplace Health Gold Achievement for 2018.