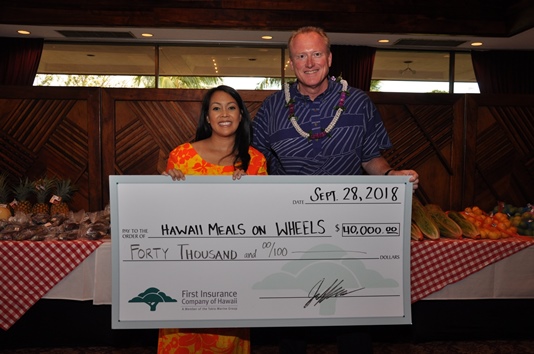 Photo caption: Michelle Cordero-Lee, CEO of Hawaii Meals on Wheels (HMoW), accepted a check for $40,000 from Jeff Shonka, president and CEO of First Insurance Company of Hawaii (FICOH) at HMoW’s annual gala in September 2018. HMoW is one of many Hawaii nonprofits that FICOH supported in 2018 through donations and community service.

Augmenting these charitable contributions were the more than 2,000 hours FICOH associates volunteered in the community in 2018, including for Hawaii Meals on Wheels, American Red Cross of Hawaii, Lunalilo Home, Sustainable Coastlines, the Institute for Human Services, and Special Olympics Hawaii.

“From the beginning, First Insurance associates have recognized their responsibility to Hawaii,’” said Jeff Shonka, FICOH President and CEO. “One way we strive to fulfill this responsibility is through our support of Hawaii’s nonprofits, which is why we are so pleased to be able to increase the size and impact of our charitable giving starting in 2018 and going forward.”

To learn more about FICOH and its community giving, visit http://www.ficoh.com/about-us/community/.

First Insurance, a member of the Tokio Marine North America (TMNA) group of companies, enjoys an “A+” rating from A.M. Best Co.

Proud of its broadly experienced, service-oriented staff, First Insurance employs more than 350 insurance professionals and distributes its products through 26 independent general agencies. First Insurance was named 2018 Kupuna Advocate of the Year by Hawaii Meals on Wheels (HMOW) for its exemplary support of HMOW and other organizations that serve seniors. It was also awarded the American Heart Association’s Workplace Health Gold Achievement for 2018.
Follow First Insurance on Twitter, Facebook, and Instagram.